Text-sharing “pastebin” sites, such as Pastebin and Pastie are a popular repository of compromised data. Keeping an eye on these websites can help identify a breach related to you organization, as I wrote earlier. They can also help during the reconnaissance phase of a penetration testing project, allowing the assessor to collect sensitive information about the target for follow-up attacks.

The sites to which I am referring are designed for sharing text over the web, such as: Pastebin, Pastie, FrubarPaste, Codepad and Slexy. In some cases, perpetrators of computer breaches post the data they have stolen on such sites. Sometimes, sensitive information is unwittingly leaked by a company’s employee.

An Internet-based penetration tester often begins the project by mining public data to identify sensitive details regarding the target. This reconnaissance stage of the assessment is typically used as the base for launching further attacks. When conducting such a project, consider including the text-sharing sites mentioned above in your search, mining them for records related to the target, such as:

To see the kind of data you can locate on text-sharing sites, take a look at Silas Cutler’s post The Dangers of Pastebin Sites. Silas has been scraping these sites for several months to mine the data publicly shared there. The data he observed included credit card numbers social security numbers, cracked Wi-Fi passwords, username and password dumps, chat logs, etc. 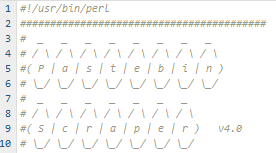 Scraping and archiving contents might be attractive for an organization conducting a lot of penetration tests, but might be an overkill for many testers. If searching local archives of these sites isn’t practical for you, you can examine these sites for the data relevant to your target using their respective search tools or your favorite search engine (e.g., search Google for password example.org site:pastebin.com)

An alternative to Google is a specialized web-based search tool created by Andrew Mohawk called Pastebin Parser. It lets you enter a query, which it runs against several pastebin sites using a variety of techniques. Andrew also makes the tool available for download, if you want to install it locally and customize it for your needs.

Andrew also makes available a web tool called PasteLert, which allows you to set up alerts, so you get notified when the monitored pastebin sites publish content that matches the desired keywords.

The idea of mining pastebin data for penetration testing reconnaissance was initially discussed by the Corelan Team, who provides a free tool called Pastenum that you can install locally to query several pastebin sites.

As you can see, there are several ways of mining public text sites for data that might be useful during the reconnaissance stage of a penetration test. Consider adding the sites and utilities mentioned above to your assessment toolkit. And if you come across or write additional tools for this purpose, please leave a comment.