Miscreants are attracted to law-skirting schemes that generate strong revenues without significant ongoing investments. You can observe these characteristics in the trademark registration campaign described below. It seems to have been active for at least a decade and spans Texas, Delaware, Washington and the Principality of Liechtenstein. This is a manifestation of the broader set of fake invoice scams, such is the website backup "invoices" that I outlined in an earlier article.

Protected Trademarks on the Internet

After I registered the name of the malware analysis toolkit that I maintain, REMnux, as a trademark with the US Patent and Trademark Office, I began receiving postal solicitations requesting that I include this trademark in various private registries. You can see one of these letters below. (Click the image to see the PDF of the full page.)

The letter looks like an official invoice for trademark registration. In reality, the solicited $992 fee is for the proposed "service" that the notice describes in all capital letters as follows:

"THE TRADEMARK PUBLICATION PROVIDES THE NAME OF TRADEMARK OWNERS AND PRODUCT NAMES ON THE INTERNET."

The letter states that "YOUR DATA WILL BE PUBLISHED FOR A TERM OF TWO YEARS UPON RECEIPT OF PAYMENT." It describes the benefits of the service by claiming that "PUBLICATION ON THE TRADEMARK DATABASE REGISTER ENSURES THE REGISTERED PARTY A WORLDWIDE PUBLICATION ON THE INTERNET."

Buried in the paragraph that describes the offer is the phrase "THIS PUBLICATION IS AN ELECTIVE SERVICE WHICH NEITHER SUBSTITUTES THE REGISTRATION... WITH U.S.P.T.O." So, the letter does indicate that it's not associated with the US Patent and Trademark Office. Unfortunately, plenty of its recipients don't look closely at what they assume are bills, and probably pay what they believe is an official trademark registration invoice.

Send This Stub With Check in the Remittance Envelope

Recipients of the letter are asked to make checks payable to Trademark-DB Corp and mail them to 10223 W Broadway St Ste P, PMB # 336, Pearland, TX 77584. This is the location of a UPS Store, pictured by Google's Street View on the photo below. The term "PMB" means it's a private mailbox, which is a private company's version of a PO Box. 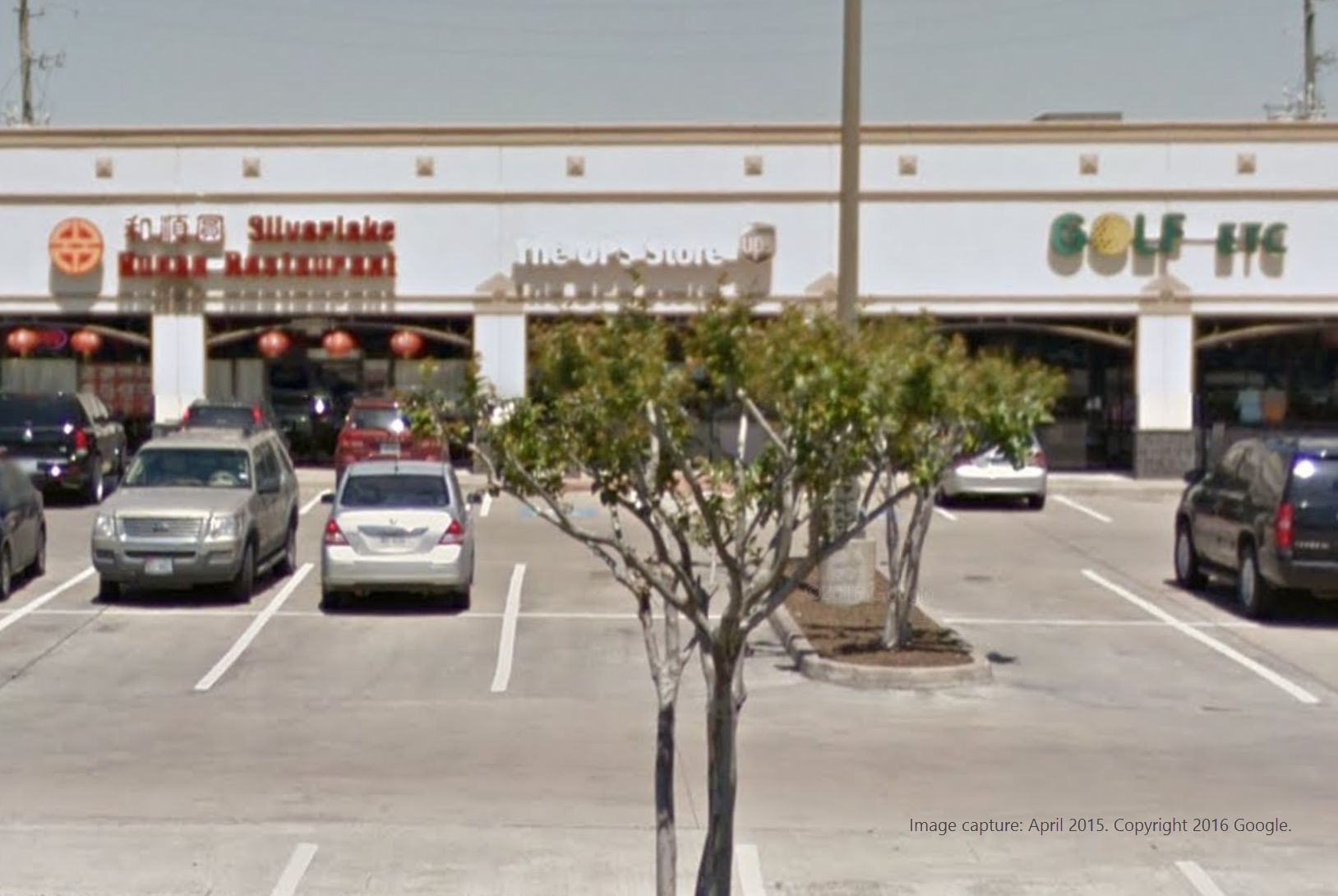 After some research, I came across another trademark registration company that was associated with the same fax number as Trademark-DB, 011-423-3841889. That company was called Trademark Info Corp. Its mailing address was the same UPS Store location, but it was using private mailbox number 330 instead of 336.

The "invoices" sent by Trademark Info looked very much like the letters from Trademark-DB, as you can see in the excerpt below. This solicitation appears to have been sent in 2006. I found it in the collection of trademark scam examples published by the firm Hodgson Legal, where you can see the full letter on page 4.

Interestingly, this private mailbox number at this location was used in 2006 by a company called Americash Hotline, LLC d/b/a Direct Cash Express, LLC, which the Attorney General of the State of West Virginia accused of being "engaged in the business of making usurious payday loans to consumers" according to the Petition to Enforce Investigative Subpoenas filed that year. However, the use of the same mailbox by Trademark-DB ten years later might be a coincidence.

Another letter sent by Trademark-DB, probably dated 2015, uses the drop address of 2100 M St. NW, Ste 170, # 330, Washington, DC 20037. This is a UPS Store location. Note the use of the same mailbox number (330) as in the Texas location. Perhaps coincidentally, another mailbox (170) in the Washington store was reported to be associated with an unrelated award-acceptance scam in 2012.

Though the addresses where trademark letter recipients were urged to send payments were in the United States, bother Trademark-DB and Trademark Info are located elsewhere.

Court of Vaduz, Principality of Liechtenstein

Trademark Info and Trademark-DB maintain separate websites, www.trademark-info.net and www.trademark-db.info respectively. Each site includes a Terms of Business section stating that the companies are registered in Principality of Liechtenstein, though at different addresses.

Liechtenstein is a small sovereign country nestled between Switzerland and Austria, according to Wikipedia. Its capital is Vaduz. Trademark-DB's site states that:

"The Court of Vaduz, Principality of Liechtenstein, shall have exclusive jurisdiction over all claims or disputes arising in relation to, out of or in connection with Trademark-DB AG..."

I was able to locate Trademark-DB's record in the Liechtenstein business registry. The mailing address of the company in Liechtenstein matches the one on Trademark-DB's website, though the record also indicates that the correspondence should be sent care of Treufid Trust. This company's website, www.treufid.li, markets the firm as "your contact for start-ups and their management, accounting, tax and business consulting, auditing and secretarial services." (I translated it from German via Google.)

I found Trademark Info's record, too. It indicates that the company is in "in liquidation," if I'm interpreting it correctly. This firm's latest address is different from Trademark-DB's address, and its point of contact is Kimar Anstalt. According to the Panama Offshore Leaks Database, it's a subsidiary of Majoria Investments Limited, which the same database lists as being "defaulted."

The two firms are clearly connected:

Though Trademark Info as a company appears to have been liquidated, the database hosted on its site is still available. I found no way to browse its full contents, but one can perform searches to query the records. For instance, when I search for records where the owner of the trademark contained an "a", the site showed me 20 records of companies with addresses in the US and Canada.

Presumably, each of these companies paid around $600 to be included in this listing, possibly because they misinterpreted the letter sent by Trademark Info as an invoice. The service for which they paid was of dubious value. As far as I can tell search engine don't include the site's contents in their index, so people are unlikely to come across the trademark's entry in this database unless they specifically search the database for it.

Another indication that companies issued payments to Trademark Info comes in the form of unclaimed funds that Texas Comptroller of Public Accounts is holding for the now-defunct company. I came across these records on the Texas government's website that lets you search for such funds. It listed two unclaimed payments for $587 and two for $1,174, dating from 2005 to 2010.

Another example of the recipients treating Trademark Info's letters as invoices can be seen in the petition that Mineola Water Corporation filed with the US Bankruptcy Court in Alabama. The company listed Trademark Info as a creditor "holding unsecured nonpriority claims" for its Sip of the South trademark in the amount of $596. The claim seems to be dated to 2008.

The database maintained by Trademark-DB is online as well. Like the Trademark Info catalog, the contents of this database do not seem to be available in search engines' indexes. A few queries that I ran showed me various records registered between 2005 and 2012. It's strange that I didn't come across the more recent entries, given that I came across "invoices" that Trademark-DB sent between 2013 and 2015. I doubt people stopped responding, so perhaps the company stopped bothering to add new entries to its database? Or maybe the dates in its database are wrong?

The US Patent and Trademark Office maintains a page that warns about "non-USPTO solicitations that may resemble official USPTO communications." It includes several examples of what the page calls "non-USPTO solicitations about which we have received complaints within the past several months." It carefully avoids using the term "scam," except when referring to the criminal indictment issued against one of the listed entities.

Though the list of non-USPTO examples includes three letters sent by Trademark-TD (1, 2, 3) for its Texas, Washington and Delaware locations, the scheme involving Trademark-TD is still active. If it is, indeed, associated with the actions of Trademark Info, these machinations have been going on for at least a decade. The longevity of the campaign isn't surprising, given the difficulty of tracking down the companies and individuals behind them, especially when the controlling organizations are in the Principality of Liechtenstein.

Yet, the checks are being collected from US-based locations, which can be used as a starting point for further investigating the schemes that, at best, push the boundaries of US laws.  For example, Title 39, United States Code, Section 3001, reportedly "makes it illegal to mail a solicitation in the form of an invoice, bill, or statement of account due unless it conspicuously bears a notice" stating that it's not a bill. Furthermore, I wonder whether the lack of value in being listed in a private trademark registry might violate US federal and state laws that prohibit deceptive and unfair trade practices.

If you receive misleading communications from private trademark registration entities, the USPTO encourages you to file a complaint with the Federal Trade Commission (FTC). It also says that if you receive solicitations that are not already listed on the USPTO page mentioned above, that you email  TMFeedback@uspto.gov. Lastly, USPTO recommends that you report the incident to your state's "consumer protection authorities," which you can locate via this link.