Discovered in early nineteen hundreds, radio promised to be the most influential technology of the twentieth century. Because of the amazing speed, reliability, as well as the relatively low cost of communication, it became widely used by governments and private enterprises all over the world. This paper examines development of radio broadcasting in the United States and the newborn then Soviet Union.

The following message was broadcasted on October 30 (November 12 in the new calendar) of 1917 via the wireless telegraph with the intention to reach potential revolutionaries in Europe, as well as actual ones in Russia. Indeed, Soviet revolutionary messages were the first to be recorded in the history of wireless propaganda.1

V. I. Lenin, the leader of the Communist Party at that time viewed radio broadcasting as a method of social control of the masses, a practical and the most effective way of communicating with the people of Russia, as well as of foreign countries. The significance of radio was magnified by the enormous size of the new federation, poor conditions of the roads, high levels of illiteracy, and the diversity of nationalities in the country.3 Because of the extreme importance of mass communications, radio stations were among the first targets of the revolution of 1917.4

In 1917 voice radio was not available yet, so the radio broadcasts lacked direct contact with the public. The communication scheme at that time worked as follows:

Since the first days of the revolution, the Soviet government was spending great sums of money on radio development. A number of laboratories were set up to enhance broadcasting and receiving techniques, and around 1920 a group of Soviet scientists were able to transfer human voice via radio waves.6

In 1921, using the new technology, a powerful station was set up to broadcast every day for a few hours. The new program was called the "Spoken Newspaper of the Russian Telegraph Agency," and featured mostly news and propaganda material.7

Because radio receivers were still very expensive and unavailable for private use, sets of loudspeakers were installed in places of public gathering to make the spoken newspaper accessible to the people.8 Lenin expressed his views about these broadcasts in the following statement:

"Every village should have radio! Every government office, as well as every club in our factories should be aware that at a certain hour they will hear political news and major events of the day. This way our country will lead a life of highest political awareness, constantly knowing actions of the government and views of the people..."9

Due to major political and economic discrepancies between Russia and America, radio broadcasting development followed a much different path in the States.

In 1906, an inventor from the General Electric Company (GEC) developed a device capable of transmitting human voice through radio waves. This technology was put to use in 1917 in a powerful station in New Jersey by Guglielmo Marconi, who represented his British company. This radio station was then taken over by the US government in 1917 to be used for communications during the World War I.13

The great significance of the device was noted to be the ability of one nation to speak to another, and after the war US government was reluctant to give the technology back to the British company.14 Instead, the government offered its support to GEC, preferring state monopoly to the foreign one. The idea was to organize an American radio company powerful enough to withstand Marconi commercially, and GEC would become the nucleus of such enterprise.15

The American General Manager of the Marconi Company realized that state and public opinion were raging against his company, and was forced to give up his share of the market. Instead, the American Marconi Company merged with the newly formed Radio Corporation of America (RCA), opposing the monopoly of GEC. "RCA also allowed a limited measure of government influence in its affairs and the following provision appeared in its bye-laws:

Most American broadcasting stations of the late nineteen tens were run by amateurs, who viewed radio as a hobby. At that time, the broadcasts were still directed to a limited number of people, since "receiving a broadcast required a good bit of skill and perseverance."17

In 1916 a Westinghouse engineer began regular radio broadcasts, playing music during his programs, apparently funded by a local store selling radio receivers. This idea was picked up by Westinghouse, that in 1920 established the first American commercial radio station, KDKA.18 By establishing such a station Westinghouse took an enormous step in radio development by realizing that the future of the radio lies in mass communications, and not in confidential radio conversations.

Commercial stations such as KDKA were funded by sales of radio receivers that were necessary for listening to their programs. The new marketing strategy became very popular in nineteen twenties -- 670 stations were licensed in the US by the end of 1922.19

The main goal of these companies was the sale of equipment; broadcasting was simply a way to promote sales. But, as radio technology was becoming more popular, sales of radio sets were being affected by radio amateurs that assembled receivers from parts.

Radio companies were slowly realizing that the sales of radio receivers would not support their industry for long. A hit idea from AT&T, a partner of RCA, was to sell air time to businesses willing to advertise on the radio. The idea of advertisement on the radio was strongly opposed by the public, and has reached its crisis in 1927, "by which time the industry had discovered which side of its bread was buttered—there was no going back."20

In 1926, a High Court judgment ruled that government regulations imposed on radio companies were too strict. The result of this decision was "chaos in the airwaves as the radio stations arbitrarily increased power, shifted frequency and started up without licenses."21 The American public demanded the return of government regulations, and in 1927 the Federal Radio Commission (FRC) was founded.

By monitoring and regulating the development of radio stations, FRC brought back the order into the radio business. An Act of 1934 clarified the function of the Commission, which included

"studying new uses for radio, providing for experimental uses of frequencies and generally encouraging the larger and more effective use of radio in the public interest."22

The Act also spoke of broadcast licenses providing use of channels, "but not the ownership of thereof."23

Comparing the Development of Radio in the Two Countries

Exploring the early stages of radio development in the US and the USSR, I found no evidence of any communication between researchers of the two countries. Isolated from each other, the United States and Soviet Union were progressing independently. For instance, attempts of speech broadcasts in the US were registered as early as 1906, while Russian scientists succeeded in voice transfer only around 1920.

Different political situations in the countries contributed to the growing breach in radio development between them. Russia, overtaken by revolutions of the late nineteen tens was concerned with reaching as many people as possible, and right away viewed radio telegraph as a mass communication technology. America was not experiencing such crisis at that time, and discovered this potential of radio broadcasting a bit later.

Another difference in radio development between the two countries was the type of programs they broadcasted. The main features of Soviet programs of that time were news and propaganda, while American stations started off by playing recorded music.

Furthermore, following socialist ideology, the Soviet government immediately assumed rigid control over radio. Broadcasting stations in the USSR were government owned and funded. The US government, on the other hand, took the role of a regulator of radio, letting private enterprises own and finance the stations.

Because of extensive government funding, Soviet Union of the nineteen twenties was a world leader in radio broadcasting. But, because of economical and historical circumstances, radio receivers were not easily available to the Russian public at that time (see Figure 1).

Indeed, there were probably more differences than similarities in the evolution of radio broadcasting in the US and the USSR, probably due to the insufficient communication between the two countries. One can't help but wonder what the world of radio would be like if the two nations coordinated their radio development efforts. 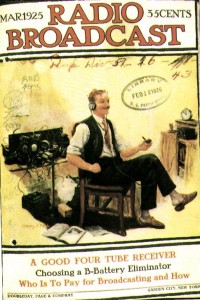 During the World War II, the radio was praised by posters such as the one in Figure 3. The posters praised radio technology as a symbol of freedom. This image was displayed in Steven Lubar's InfoCulture book (used here with permission). 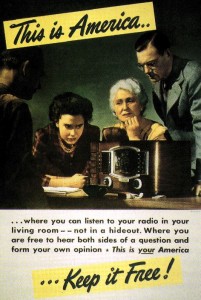