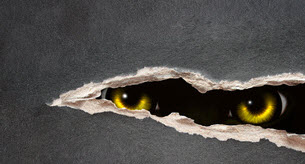 Common wisdom suggests that anxious individuals are better at spotting danger than those with more mellow personalities. However, research by Tahl Frenkel and Yair Bar-Haim indicates that the opposite may be true: People with nonanxious personalities might be more skilled at spotting the early signs of trouble. This finding could highlight the type of people best suited for information security jobs.

Some of the individuals selected for the study possessed anxious personality traits on the a State-Trait Anxiety Inventory scale, while others were nonanxious. The participants were shown photographs of a face that exhibited a progressive degree of fearfulness. The researchers measured how early in the progression the participants could detect fear on the photos.

"The brains of anxious subjects barely responded to the images until the frightened face had reached a certain obvious threshold, at which point their brains leapt into action as though caught off guard. Meanwhile nonanxious respondents showed increasing brain activity earlier in the exercise, which built up subtly with each increasingly fearful face."

The researchers concluded that anxious people might lack the ability to detect threats in a granular manner and “therefore might face threats with no prior warning signal—further contributing to their already heightened anxiety level and perhaps associated with their enhanced baseline threat vigilance.”

If there is a stereotype of an information security professional, it is sure to include anxious characteristics, such as concerns regarding threats, distrust and perhaps a degree of paranoia. These traits allow us to recognize the signs of danger, building defenses in anticipation of risks and also responding to the situation when the defenses fail.

Yet, those professionals who are calm and nonanxious might be better at spotting early warning signs of an intrusion before it escalates into a major breach. This skill is similar to the ability to detect the subtle signs of fear when looking at a photograph of a face. If this is true, then I wonder whether such individuals trust their instincts and have the time to begin investigating the potential problem early enough.

If this is interesting to you, see my earlier post Are Mistrustful Individuals Better at Information Security?